Can dogs talk to each other

This post may contain affiliate links for your convenience, which means I will be compensated if you make a purchase after clicking on my links. 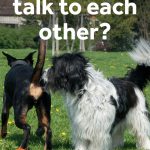 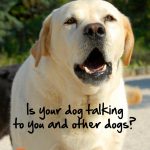 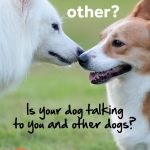 Dogs have a unique language of their own. Dogs talk to each other by using their body, voice, and nose. By moving their body, ears and tail, barking, whining, and leaving scents to communicate with each other.

Dogs have a set of calming signals they use to announce stress to other dogs and to avoid conflict with each other. They include things like turning away, walking in a curve, shaking it off, yawning, and lip licking.

Once you know what to look for, you’ll realize your dog has always been talking to you and other dogs.

How do dogs use their BODY to talk to each other

Dogs use their entire body (eyes, ears, nose, tail, and the body as a whole) to communicate different emotions and warnings, we call this dog body language.

Dog body language is a passion of mine. Learning to read our dog’s body language has created a strong bond between us that only gets better over time. It gives us the ability to understand what our dogs are feeling at any given moment and help them accordingly.

Dogs also use their eyes, mouth, and ears to communicate. Look at your dog’s ears… ears that are held high on the head and tilted forward indicate interest or confidence. Ears that are titled back or flat can indicate worry or submission.

A stiff or tense body is a sign of an alert, dominant, or sometimes aggressive dog. The dog may or may not be wagging his tail.

A wagging tail does not always mean they are happy. So, it’s important to look at the dog’s entire body.

When a dog turns away, avoids eye contact, walks in a curve, shakes (like shaking off the water), yawns, and licks lips, they are telling the other dog they want to avoid any conflict. These are calming signals a dog uses to calm the situation.

Learn more about dog body language and see the chart.

Dogs have a wide range of vocalizations, including barking, growling, howling, huffing, whining, whimpering, and yelping.

Dogs talk to each other by barking

A dog’s bark can communicate a variety of information, including “I’m ready to play”, “Stay away or else…” or “I’m scared”.

Deciphering the sounds and patterns of a dog’s bark can feel complicated, but you can learn more about the types of dog barks here.

A dog’s growl many times often serves as a warning and should never be ignored. But some dogs like to growl when playing.

Growling is a perfect instance when you need to assess the entire dog’s body language.

If the dog is growling around food, bone, a toy, or something else they find valuable you may be looking at a case of resource guarding. You should seek specialized training advice immediately.

Howling is used for many forms of dog communication. Howling can be used as an alert system or just looking for attention, even to express pain.

Because of the wide range of howling forms, it’s important to assess the entire situation of your dog and why they are howling.

A dog may whine at another dog out of excitement, frustration, or even fear. Some dogs whine to seek the attention of another dog or person.

And sometimes a dog will use whining as an appeasement behavior, you will notice a tucked tail and lowered head.

Dogs can talk to each other without barking or even seeing each other.

According to PetMD, a dog’s sense of smell is 100,000 times more intense than a human’s.

Have you ever wondered why dogs smell each other’s rear ends when they first meet?

Dogs use pheromones to communicate and are found in a dog’s saliva, feces, urine, bodily secretions, and glands.

Pheromones: a chemical substance produced and released into the environment by an animal, especially a mammal or an insect, affecting the behavior or physiology of others of its species.

A dog can learn important information about each other when the rear end or feces. A dog can detect social status, age, sex, genetic relatedness, and its emotional and physiological state through these pheromones.

Dogs can even detect the amount of time that has passed since the pheromones were left. Pretty amazing, right? It’s been said that dogs’ sense of smell is their highest form of communication with each other.

Get your FREE *From Rescue to Home, Your Survival Checklist*

Dogs are blessed with the natural ability to talk to each other through calming signals, body language, barking, and pheromones. Although a puppy’s mother will teach them certain lessons when they are young that they will carry with them throughout their life.

Your dog, peanut butter, and xylitol

Spaying and Neutering Your Dog [everything you NEED to know]

Mutt vs Purebred – Which is better?