How to give a dog a pill [tips & tricks]

Garlic and Dogs – Toxic or Healthy?

Dog Microchips: Everything you need to know

This post may contain affiliate links for your convenience, which means I will be compensated if you make a purchase after clicking on my links. 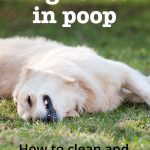 It started with a drop and roll and before I knew it, I had a stinky puppy. I didn’t realize how bad he smelled until we got into the car to drive home. We were at a soccer game an hour away from home. Thank goodness it was summer, and we could open the windows.

I will never forget that day our dog rolled in goose poop, and little did I know that would be the first of many poops I’d be washing off his fur.

We bathed him as soon as we got home, but he still stunk. Second bath, still smelly. The third time we used a special home remedy and like magic, the smell was gone… keep reading to get the all-natural mixture we used.

How to clean your dog if he rolled in poop

What to do when your dog rolls in poop. If your dog rolled in something and stinks, use this home remedy for your smelly dog:

TIP: Use these bath gloves, they make bathing your dog 10X easier.

This solution will work for a dog that rolled in a dead animal, animal poop, and even skunk spray. The hydrogen peroxide and baking soda combination naturally break down odors. The soap breaks down the oily part of the poop.

This peroxide/baking soda solution has been tested by me and many other dog parents, it even passed the Mythbusters test.

TIP: If you prefer not to make a home remedy, Nature’s Miracle Skunk Odor Remover is a great alternative.

Why do dogs roll in smelly things?

Why is it that what a human finds gross and stinky, our dogs find so appealing?

The bottom line, it’s natural for dogs to roll in smelly things.

Living out in the country we have a variety of wild animals in our area, including wild turkey, coyote, fox, rabbit, skunk, and more.

So, if one dog finds a treasure to drop and roll in, the other two are sure to follow suit. Which means I’m giving three dogs deep clean baths. Fun!

Regarding why dogs roll in poop (ugh, right!):

I reached out to my favorite dog trainer, Steffi with SpiritDog Training, and here is what she had to say about why dogs roll in smelly things:

“Our beloved dogs can show a variety of weird and wonderful behaviorisms. The strangest of which must be when they decide to roll in poop, a rotting carcass, or something similarly foul-smelling – ahhh!

This bizarre behavior [dogs rolling in poop and other smelly things] has not yet been found to have a definitive reason behind it, but there are theories out there to try and explain it.

Scent plays a big role in communication for dogs and provides them with information about their pack, intruders, and surroundings.

Smelly things have been hypothesized to be used by wild dogs to communicate with other members of the pack or with intruders. Some theorists think that dogs may roll in smelly things to mark their own scent.

Scent marking is a way of communicating with other dogs about their presence in the area. This scent may be left to tell their pack or family members that they have been in that location, or it may be used as a way of marking territory to warn off intruders.

Another hypothesized reason behind this behavior has been assumed that dogs may be trying to hide their own smell by rolling in the smelly substance. This may relate back to when dogs were wild and had to hunt for their food. By rolling in their prey’s scent, or their prey’s poop, the dog’s own smell would be hidden. This would make hunting easier, allowing dogs to approach prey without warning them off.

Our domestic dogs may be doing this behavior as part of their inherent instinct which has been passed on from their wild ancestors.”